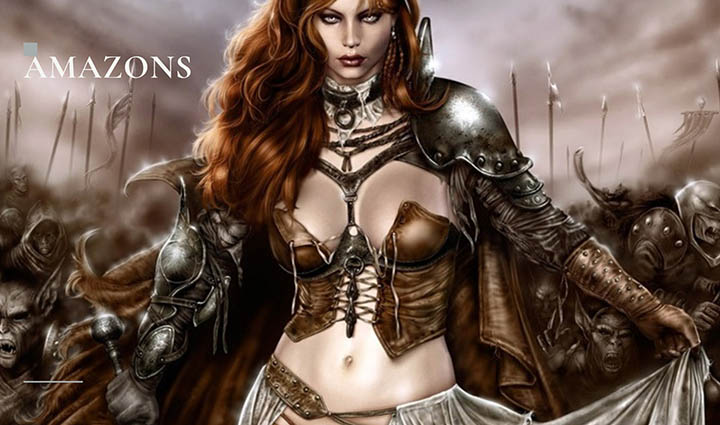 The story begins with the girl band “The Amazons” arriving in a small provincial town in one of the distant countries. The girl band is consisted of seven most beautiful and talented girls. Number seven surely brings them a lot of luck. They are young, happy, successful and and popular among the large number of people. This time they are performing in the biggest club in this town. A huge crowd of fans is standing impatiently in line on the street to see them.
When the show finally begun, The Amazons start signing, dancing in huge wine glasses filled with water and foam. They perform acrobatic tricks in these glasses. The audience is in awe. They are cheering and clapping enthusiastically.
After a very successful performance The Amazons continue their celebration in the bar close to the club where they performed. They dance and have fun. Then a young man with a black patch on his eye enters the bar, walks towards the bar stand and gets some whiskey. The girls dance on the bar stand.
Suddenly, 10 armed bandits enter the bar and start shooting. They walk toward the guy with the black patch. His name is Wei. People start panicking and running for the exit. Only the Amazon girls are not in rush to leave. Wei fires back at some of the bandits skilfully killing them. The rest of the bandits surround him. The Amazon girls also join the fray. They take out the weapons that were hidden in their cloth and start shooting at the bandits. Some girls start throwing knives killing some of the bandits. Everyone is shocked. The girls easily get rid of all the bandits. Wei waves thank you to them. But the girls start attacking him. Wei is fighting back as much as he can. They surround him. He fights back not being sure why they saved him in the first place and why they are attacking him now. The leader of The Amazons, Angela tells hims that somebody hired them to bring him alive, as he is very valuable and the prize for finding him is $1M. But they didn’t know they are not the only ones who are after Wei. Those bandits almost ruined their plans. It turns out that the girl band is actually an undercover professional killers, who can eliminate any unwanted ones. The girls capture Wei.
Meanwhile one of the bandits who survived returns to his boss and reports that they failed their mission because of the Amazons. The boss gets furious and orders to find them. They start doing background research and find out that each one of them had a very interesting past, dealt with that Boss’s bandits and caused a lot of trouble before.